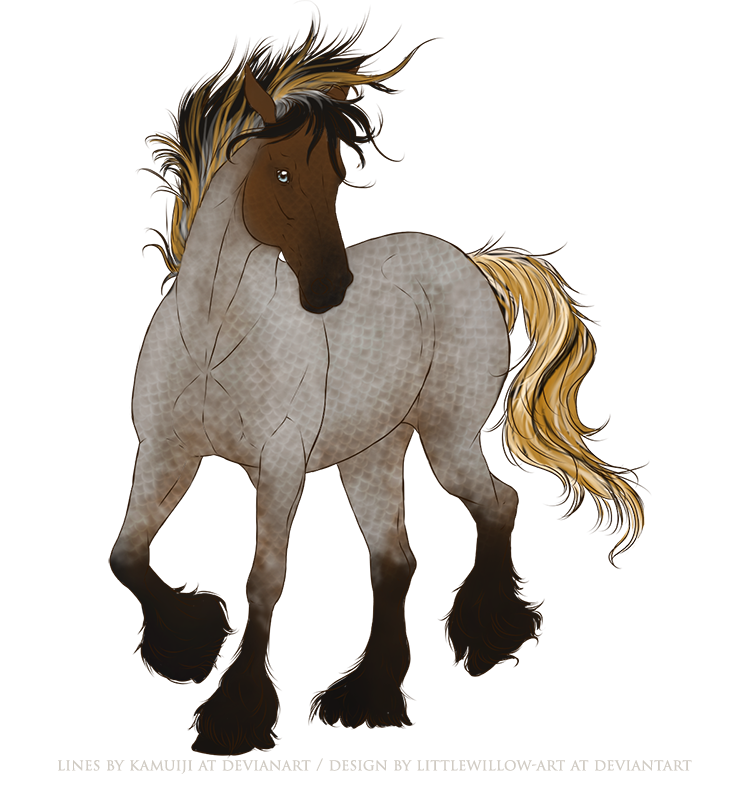 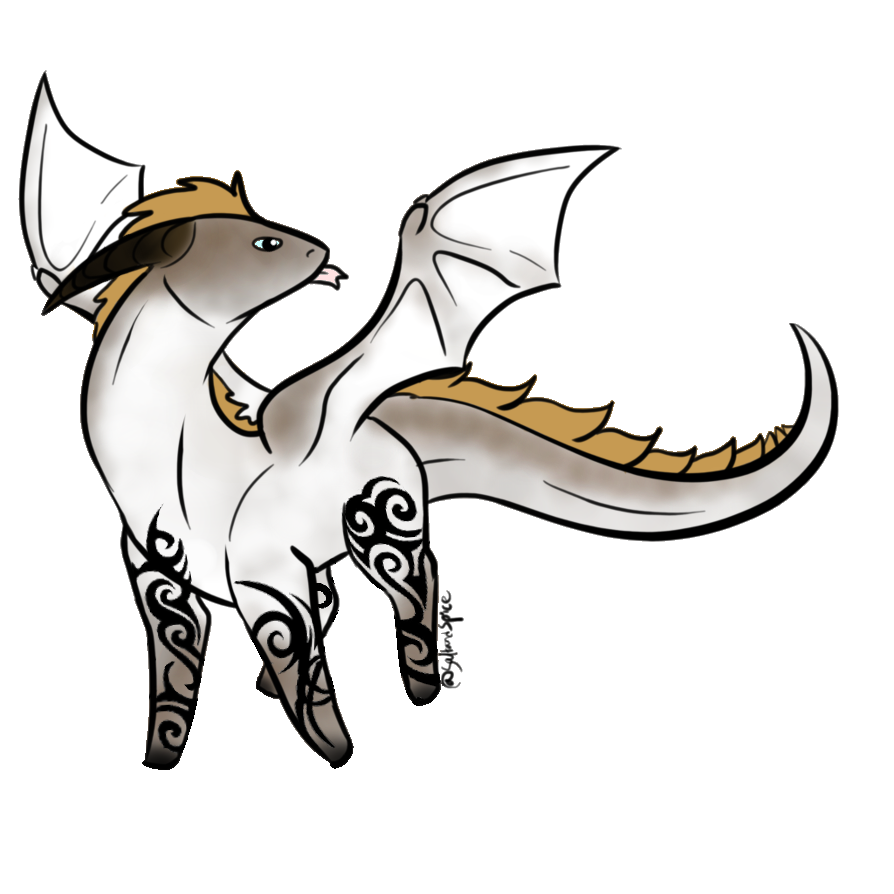 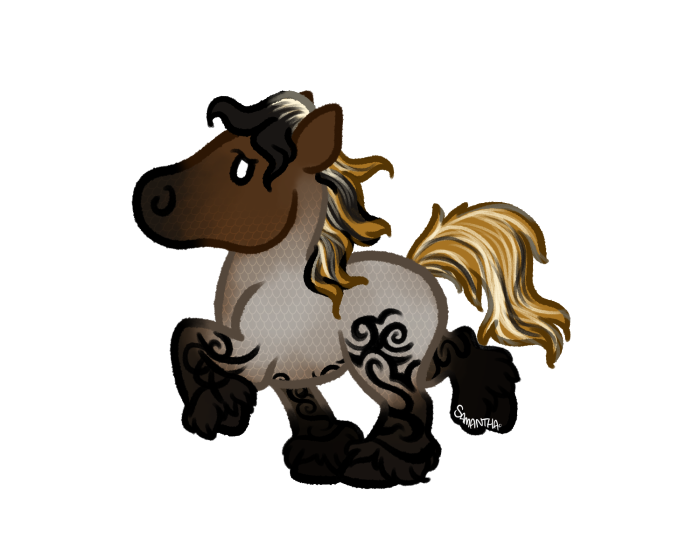 Markings: Not marked with white other than silver and roan genes

Hybrid of baroque (Friesian), draft, arabian, andalusian and other mixed breeds in his lineage. He mostly conforms as a Murgese horse due to this mix; muscled like a draft-warmblood mix, mostly roman nose, and flowing long mane and tail and fetlocks like a Friesian would have.
His color is silver bay roan, thus with a brown nose, more bronze-silvery body, almost-black feet with the classic roan upside-down V-shaped distinction between leg and body, and silvering mane and tail: more silver towards the tail end and more black towards his poll; has an entirely black forelock.
Earned metallic gold mane/tail during the Beqanna Games for getting first place with the team in strength category. This appears in slashes through his mane, so that some of the original silver and black is still visible.
After the Icicle Isle Cure Quest, Leilan gained “Icy Appearance”. This manifests currently as a thin layer of Ice Scales, so he is “glazed over” as it were.
VANTA-black tribal swirls cover his legs and lower belly area (Glowing Tattoos). He got these randomly when fairy dust blew off the Mountain; probably it was attracted to his other Mountain-earned traits.
Other than this, he has eyes that change color with his mood, a near-permanent reminder of his former Dragon Mimicry trait, though his original chocolate color shows only when the ice is melted away. His most neutral expression is ice blue, due to the dragonice in his veins.
In complicated situations, some colors may try to overlap.

At the surface: quick-witted charmer, loves to find the joke in every situation, and uses this tactic to get under the skins of those he likes. Irritating you constantly is his signature way of letting you know he likes you; or to test a new face and see how they react to him - see if they’re worth visiting again.

At the core: sensitive, very attuned to familial ties, and most of all overprotective. Would rather fight than give in. If hurt, this usually comes out in some kind of anger at the world or at whoever did him wrong. Leilan is not easily fully trusting of anyone, because letting people in means being vulnerable - better to joke or gruff your way out of it. But once he lets you in, he'll go to hell and back for your safekeeping and protection.

Overall outcome: usually makes rash decisions, either for good or bad, will fight anyone who even remotely threatens anything or anyone he has marked as ‘family’. Warrior-trained, honest to the point of it being painful; he won't even be sorry he said it aloud if he does notice. Good enough with words if forced, but usually doesn't care enough about being diplomatic to keep it up for long.
Seems to have a soft spot for children, and doesn’t mind stepping in as third (or more) co-parent if he thinks it benefits the kid’s development.

Born in the Jungle to Scorch, then-khaleesi, twin to Wrynn (whose appearance had been altered to look like Camrynn). Only knew sisters at the time.

Disappeared from Beqanna around the time of Volcan’s birth and the death of both his parents, kept away for a good amount of years. Returned to BQ at the age of 5, but BQ had passed roughly 25 years. Scorch had by then been pulled back out of the Afterlife by her grandson Nihlus.

Joined the Beqanna Games and won with his team, earning him gold in his mane and tail and ~Frost Aura.

Joined Brennen’s quest to revive the Brotherhood in Ischia; for a time they were successful. Leilan also met Breckin around that time, who had been recruited by Scorch to Nerine, but lack of communication and admittance of feelings ensured they did not get together for quite a while yet.

Travelled to Loess with his nephew Trekori to meet Arthas; left a lasting impression because he was stolen to Loess not too long after that. Leilan did his best to be the most annoying prisoner ever. Met Wolfbane here as a yearling (1,5) since the latter was recruited by Arthas at the time. Escaped Loess after about 3-4 BQ months and was not chased after. Returned to Nerine where Breckin practically ran away at his explanation of where he’d been. Met Vi and her son Drustan.

Met Briseis and sired a daughter, Chryseis, whom he met the next summer. Met Thalassa, Roseen and Jenova in that next year, and sired three foals with them as well. Attempted a relationship with Roseen since it didn’t work our with Breckin, but this only hurt everyone involved since he could not commit to her.

Tried throwing himself of the Mountain, gaining immortality instead. Went back to Ischia to ask Brennen for advice, met Deiti, a kelpie, and got himself nearly eaten bad he not just been made immortal. Changed after being bitten, not into a kelpie but into somewhat of an ice dragon (~dragonice and dragon mimicry, lost frost aura).

Returned to make up with his family and friends; poked Arthas a bit about being king of Sylva instead of Loess, accidentally instilled a fascination for kelpies in Chryseis, went to make up with Breckin, and not too soon after decided to move permanently to Nerine.

Happiness didn’t last long because Roseen returned that spring, birthing Thorgal on Nerine’s doorstep, causing as much family drama as one could expect.

During that time, Klaudius had been held captive in Nerine for numerous crimes, held there by Wishbone so that Tephra would be free of him, and left to Breckin when she got passed the crown. Klaudius escaped leaving Breckin several threats, thus Leilan kept an eye out for him. However, he was not in time to save Sabra, another on whom Klaudius wanted revenge, because he had estimated the lavender pegasus to come for Breckin first. Klaudius got intercepted by him and a fellow Nerinian 'Prince', Castile, before he could escape however.

While expecting his first foal with Breckin, Carnage managed to revive Pangea and with it brought a Plague into the land. The Brotherhood of Ischia joined the Nerinians to become one kingdom, and Leilan travelled to the newly formed Icicle Isle and laid claim to it, causing him trouble for almost a full BQ year since no less than three others seemed to want it. But for the sake of his and Breckin’s coming child (turned out to be twins), he was insanely stubborn and eventually won it simply by persisting - and the favour and backup of Nerine. Joined the first quest for the Cure with Litotes, Kagerus, and others. Earned ~Icy appearance.

Leilan has wandering feet, however, and after several years of leading a relatively happy life (let’s forget about the Chryseis-Incident), he followed Breckin out of Beqanna, since she was desperate for a break. He left the Island to Jesper, who had been in the Brotherhood with him.

Leilan returned after about two BQ years, joining Hyaline because it has icy mountaintops - not wanting to undermine Jesper’s rule of Icicle Isle by returning to it at the time. Not too long after that, he spied Breckin with Ivar in the river. She went with the blue tobiano willingly, and so, heartbroken, Leilan decided never to fall in love again.

He also made a trip to the Mountain several times to ask for a change. He’d gotten a taste of life without looking fearsome, and was curious if this would be possible in Beqanna - to shift would be making him able to choose his form. Ice Fairy, who’d once granted him immortality, asked him to prove that this upgrade would not be just for him, and to live a year in the coldest place Beqanna had to offer, and so he set back for Icicle Isle after all.

Met Divest and Serabi in the meadow on his way from the Mountain to the north. Briefly visited Loess as well, met Oceane. Met Lilliana in Taiga on his way back to Icicle Isle.

On Icicle Isle, he saw Briella again, and also adopted the little foal Beryl, whom he went back to the mainland for to gather food. Met Anatomy and all other horses who were present. Saved the life of Firen by stopping his bleeding out, however at perhaps a cost which neither of them knew about. Was granted ~ice dragon shifting for his efforts (traded dragonice and dragon mimicry), which changed the icy layer on his scales into aesthetic ~ice scales, made of ice.

He was inventing how shifting works; travelled to Icicle Isle to ask Jesper about it and found Dracarys there visiting. Met Arquus in the Field, joined him in visiting Island Resort and Brilliant Pampas to see if it suited either of them. Neither seemed to fit the outgoing stallion at the time.

Went back north, only to discover Jesper had been stolen. At around the time he visited Nerine (of course, not keeping his mouth shut about the Isle's lack of a leader), Icicle Isle was attacked by a dragon. Leilan, now a shifter, involuntarily shifted upon the sight and went in for damage repair and chasing out the firecracker. This turned out to be Castile, trapped in his dragon shape and mind by a fairy. The Isle was no longer the same, even with several horses being involved in saving it.

Right after trying to salvage what they could of the Isle, Leilan laid claim to it once more; which would mean unseating his Brother Jesper, whom he had chosen to lead it in his stead back in the day. No push-back came, and the ice dragon recruited a band of misfits and ruffians the type fit to survive the broken Isle and a group that could withstand any harsh looks. They started 'raiding' for food on the mainland, starting with the Brilliant Pampas, which had all the food and was also a part of Loess, the kingdom that was, or had been Castile's.