Perlino coat with a metallic, golden sheen, typical for Akhal-Teke's. Pink skin showing around eyes and nose. Very light blue eyes with amber flecks. Hooves a bit darker than coat color, a sandy brown color. Head and mane sometimes covered by waterplants from sticking her head in a pond.

Sheika is bit of a dreamy, wacky, off-in-her-own-world type of character. She talks to fish at least as often or more than she does to her fellow horses, and consults them (the fish) before making important (or not-so-important) decisions. She is generally friendly and good-humoured, and content to just bumble around the world without a plan. However, if something sets her off she can become unreasonably moody and sulky, and she will most likely turn to her valued fish friends for consolation. Her ways of speech can be very vague and incoherent, since she usually thinks out loud and her mind is like a toddler; kind of hard to predict where it's going to go and easily distracted. In addition, her using fish as a metaphor for most things in life doesn't help her clarity of speech either. She likes to search for medicinal herbs. 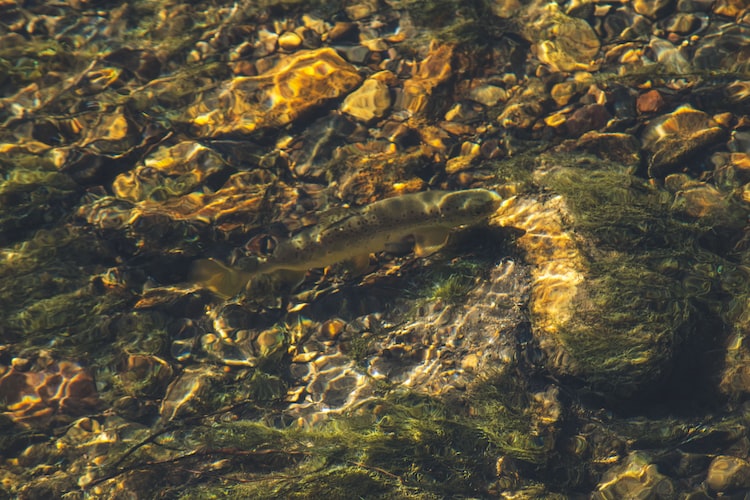 Sheika was born to two loving parents. However, they were herd-outcasts, for reasons they never told her. Thus it was always just the three of them during Sheika's childhood. Yet, she was actually quite content with her life. She used to roam around the world with her parents like a happy little nomad family. While she had no peers for friends, she discovered early on she could talk to fish. In this way, fish became her friends instead. However, one day an accident happened, which resulted in her parents passing away. This was, ofcourse, a traumatic experience for the young Sheika. Suddenly she was alone in the world, and she had no idea where to go. With no one left to talk to except for the fish, she fully turned to them in order to forget her grief and fill the void her parents left. For a long time she just followed rivers and other bodies of water in order to stay close to her friends, and did not search out the company of her own species anymore. In the end, the rivers lead her to Beqanna. She sees her arrival at this horse-filled country as a sign that she should mingle with her own species again. However, her long time with the fish has resulted in her being a bit socially stunted. For example, she often misses subtle clues and undertones when conversing with other equines or breaks the most basic of (unwritten) rules. This may lead to at best, social blunders, and at worst, dangerous situations (i.e. just waltzing into herds' lands without a clue, offending higher ranked individuals).