"He will inevitably decide that it all fell apart because he had orchestrated it and he will carry the blame like a stone in his chest, too. He will add it to the pile and perhaps, someday when there are enough stones to weigh him down, he will walk into the sea and let them drown him" -- Kensley, written by Savage 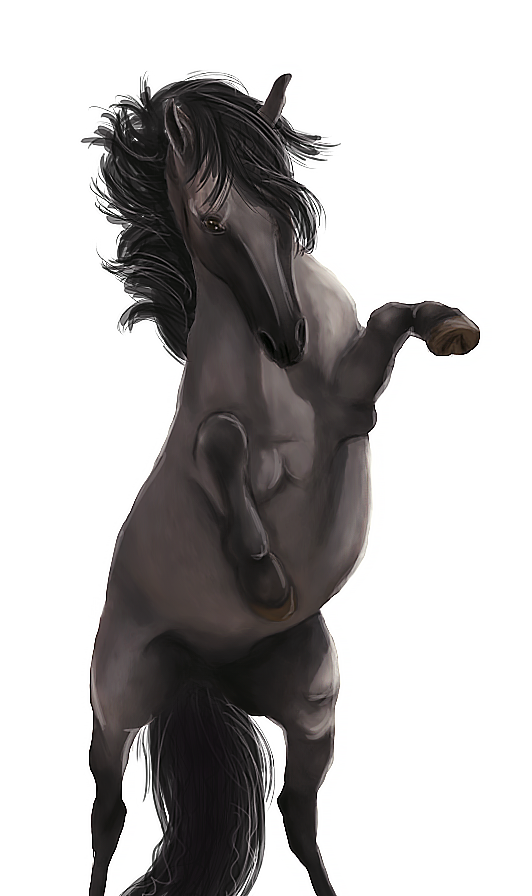 Nikkai is slightly taller than her traditional Sorraia mustang cousins, though she shares their coloring. The influx of arabian and andalusian blood from her father's side gives her a taller frame and a more athletic build. She has many primitive grulla markings including leg striping above dark socks, dark face webbing, dark ears, a dorsal stripe, and 'frosting' in her mane and tail. Her body is scarred from a lifetime as a warrior, and her mane and tail are often mildly tangled. Her eyes are classic brown.

Nikkai is prickly and prideful, a warrior by nature, but she is also intensely loyal. She has always walked a thin line of balanced loyalty to individuals (her close friends and family) with loyalty to an idea or values (her beloved Dazzling Waterfalls). She speaks her mind no matter the cost, and makes fast and loyal friends alongside lifelong enemies. She has a soft spot for children and the oppressed, the traditional people sheltering in the Falls.

Nikkai was born to Dusted Feathyr after her mother was a captive of her father, Mahari, but not until the mare had been returned to her home herd. She grew up in the Brilliant Pampas with her mother, her adoptive father Achilles Legend, and all of her siblings and half-siblings. At the tender age of four, the mare followed her best friend Achilles Song to the Dazzling Waterfalls, a place which quickly stole her heart and would become her lifetime home. Upon arrival she took up training her natural inclination towards fighting and became a warrior in the Kingdom’s Army.

Nikkai joined the Falls under the Queen Rashia, whom she greatly admired and looked to for training, advice, and guidance. She served also under Tason and Freedom’s Child while she was learning her fighting craft. She was elevated to General under Queen Rashia, and she took the position with pride and fierce abilities in the warrior arts. During this time she fell in love with a stallion, Miles, and bore him a child, whom she called Miles of Memory or Mem for short. Miles later departed the Falls and Mem soon after but nothing could tear the gray mare away from the home and the people she loved. Despite her prickly nature and quick temper, over the years she became fast friends with Rashia, Disaster, Etcetera, Runic, and Chasity. When Chasity left the Falls for good she left Nikkai on the throne, have sensed a pending danger for their beloved Kingdom and firmly believing that a return to the times of the Falls’ Warrior-Queens was needed.

Though the gray mare was certainly not the best Queen a Kingdom could have, she continued to serve her Kingdom with fierce devotion. During this time she fell in love again, though she would never admit it, this time with fellow warrior Waltzing Ablaze. She bore him two colts, Raphaello and Ruggiero. Some time passed and she managed to keep the Falls out of catastrophic disaster, but then former King Texas arrived and demanded the throne, which she refused to cede to this ancient stranger. After a time he simply put an end to her resistance by stealing her, and thus her throne, out from under her hooves and placing himself as King. Despite their long associate after that, Nikkai never forgave him for what she saw as a betrayal of the Falls. However, she did eventually befriend the mare he brought in to rule beside him, and Prague would be a dear friend for the rest of the gray warrior’s days.

When the magician Core arrived, murdering Texas and taking a place beside Prague as King, Nikkai did not immediately react, mostly because of her intense and lingering hatred for Texas. Eventually Prague left as well, leaving behind several children of hers and Texas’, and leaving Tipu on the throne beside Core. Gradually Nikkai came to realize that the magician stallion had murdered more than Texas and she came to distrust him, though she loved Tipu dearly. Over the years she became like a second mother to one of Prague and Texas’ twins, Piety, who was about the same age as her youngest son Ruggiero. She also ascended again to General of the Falls, and aspired to nothing more than that. However she came to very intensely dislike Core and when he left the Falls and returned, she was one who very vehemently opposed Tipu putting him back on the throne. This rift between the gray General and the white Queen would last until the warrior’s death.

Core found Nikkai’s vocal dislike of himself, his mannerism, and his policies apparently too much to bear. Nikkai was an ornery and prickly old warrior, but always loyal to the Falls and its people, and therefore tolerated and even perhaps beloved by its residents. This apparently did not phase Core. When the warrior-mare encountered the magician by herself one fall day on the cliffs of her beloved waterfall, they argued once more and he murdered her, pushing the once-Queen off of her beloved waterfall to her death at the rocks below.

A few years later, Nikkai partially returned from the dead when her granddaughter was born, as she possessed Nekana from birth. She guided the child into adulthood and through Queenship of multiple Kingdoms. After Nekana's death, she too passed back into death until the veil between life and death was shattered by Rhy & Straia.