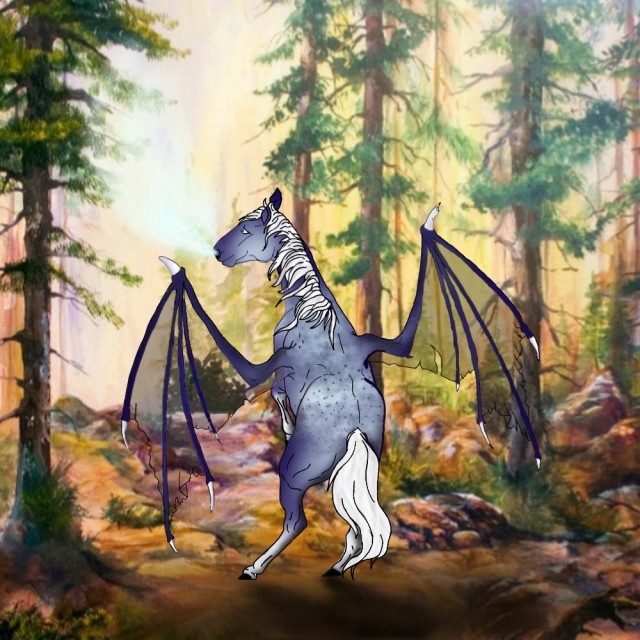 Dracarys is a dark blue spotted blanket varnish roan hybrid mare. Standing nearly at 15.2hh, Dracarys physique favors more of a strong-sturdy, yet elegant, build coming from her mother’s Friesian bloodline with very minimal fetlock hair; however, she has a finely chiseled bone structure with a slight concave profile and arched neck coming from her father’s Arabian bloodline. She has a long, slightly wavy, white mane and tail with silver highlights. Her eyes are a silver-blue color. Dracarys also has powerful dark blue dragon wings and sharp teeth.

Beqanna Year 202, March 16 of 201
Dracarys is born in the autumn territory of Sylva during the reign of Sinner and Mary. She is considered a special child due to the bond that Sinner and Valdis share together–the blood of dragons and hellhounds. Dracarys is considered to be the perfect child, thus she is raised as being proud and independent. During her first year of her life, Dracarys deeply desires to become a dragon like her mother. She goes off to the Mountain and receives a quest from a fairy where she must take something from a loved one and then return it later.

Beqanna Year 203, May 16 of 2019
Dracarys becomes a yearling during the BQ Year of 203. She witnesses Sinner and Mary mate together, thus growing somewhat hateful of her father. Her mother, Valdis, is stolen away and she ventures off to Loess and then to the meadow to find her mother. In the meadow she meets Felicitey.

Beqanna Year 204, July 16 of 2019
Sinner, her father, is defeated in a challenge to take the crown from Castile (Loess). He loses the challenge and tells Dracarys to go to Loess. She finds out Castile is her grandfather on her mother's side of the family. Before going to Loess she goes to the meadow since she cannot decide if she should live in Loess with her grandfather and being a daughter of a traitor. In the meadow she sees a hellhound and finds out it is her younger brother, Erio. Dracarys grows closer to Felicitey and starts to consider her a best friend. Despite this though, Dracarys decides to steal Felicitey's monkey companion in order to complete her quest to become a dragon[. After a couple of weeks, Dracarys returns Felicitey's companion back to her and they remain best friends. She then returns to the mountain and trades her Fire Aura trait for Ice Dragon Mimicry.

Beqanna Year 205, September 16 of 2019
Dracarys returns to Loess after completing her quest on the Mountain to become a dragon. She meets her great-aunt Cyprin and Meraxes in Loess. As well, she also meets Nodens in the field one day.

Beqanna Year 206, November 16 of 2019
Continuing to live within Loess, Dracarys keeps to herself most of the time as she learns more about her new abilities as a dragon and internally battling what she is going to do for the rest of her life. She considers leaving Loess but eventually decides against it and stays calling Loess her home. Dracarys meets Lepis in Loess and starts to consider a more serious position within her home. Felicitey and Dracarys reunite in Loess, she meets her two twin children named Vervane and Oectra.