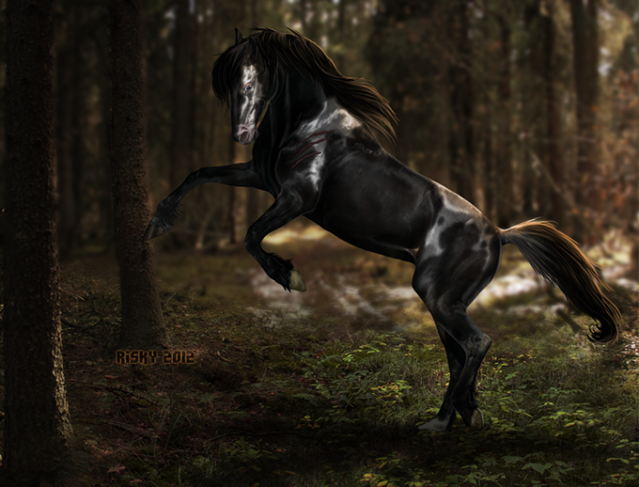 Set was born, traitless, long before the Reckoning, in the Chamber of Evil, to Starlace, and her hollow-eyed General, Chain. He quickly became the favored prince of their kingdom, learning the art of combat from his father and the cunning strategies of diplomacy from his mother and Queen. Wild and prone to impetuosity, Set plagued the kingdom as a youth. Afflicted with the at-times false sense of immunity that came with the title "heir", he once found himself banished (read: sent to long-term time-out) to the outer reaches of the Chamber. It is there that he encountered the mountain lion - a she-cat intent on feeding his two-year old body to its kittens - that left the ragged scars on his shoulders. His survival of the ordeal and subsequent change in attitude (of course, this didn't stick), led him back into his kingdom's good graces. As a young stallion, Starlace pushed him to choose a consort. He resisted at first; though he had been groomed his entire life to assume the throne, that particular future had always been a far off, hazy "when". He met Nazul in the common lands, an Amazon mare whose friendship and eventual love became some of his most treasured possessions. Disapproving of his initial choice, Starlace introduced Set to a wickedly beautiful and wonderfully clever little mare, Nera. She won him to her quickly, and, when he assumed the throne in Deember 2011, much to his mother's (and theirs) chagrin, he named Nazul and Nera his co-consorts. In 2012, Set defeated Goodevil/Cassiah, Gryffen, Brennen, and Pascal, to win the Third Alliance. Before reaching the semi-finals, the fairies rewarded Set's efforts with the gift of shapeshifting. Uncontrollable shape-shifting, that is. Closely linked to his knee-jerk thoughts and emotions, he used it to his advantage as best he could and battled his way to the final round and found victory in the form of magic. By now, Chain had died and Set rarely saw his mother (she was at her best when she was manipulating the masses, and too often with her literally rotten lover, Infection). When the magic was new, his shape-shifting was still out of his control. Ask him sometime, about his favorite daughter, Katriel, and the caterpillar she flung across the Chamber. It makes him smile every time. As his control over his powers grew, he was able to soothe and tame the creatures inside fighting for the light - eventually, his body was his own again (albeit full of a veritable menagerie). The Chamber thrived in relative peace while Set ruled. The Slave Pens, created under his direction by his father's friend and sometimes-lover, Seraph, had caused a bit of a stir in the hearts of the "softer" Beqannans. But, when Set stepped down from the throne and handed it over to his daughter, Frostreaver, and his favorite son (and, incidentally, Frostreaver's half-brother) Tatter, the Chamber had known a relative bit of peace. Nera disappeared and Nazul withdrew, changing, no longer the fierce young mare with Set-shaped stars in her eyes, but a phoenix untamed. He, too, had changed. Following the resignation of his crown, Set met Anaxarete. The winner of the Alliance before his, she was captivating - addicting. It was not love that existed between them, but a mutual respect that knew few bounds. Wildfire and shadow-ice came together - their unions producing Nikolina and Niklas, perfect offspring in their own right - and then drifted apart, but Ana is one of the few creatures littering Set's past who he is rigidly loyal to. Niklas and Salomea, who only came because Niklas insisted on bringing at least one plaything along, had gone with him and, eventually, their travels devolved into a fruitless search in the depths of the underworld, for the closure that all mama's boys seek when their mothers leave the mortal plain without so much as a goodbye. It eventually led them back to Beqanna on the shores of the newly raised Icicle Isle, into the middle of a situation that his boredom and desire to win had escalated to a (near) battle (that never came). There had been words, a throwdown, a gauntlet ignored -- and, in spite of the presence and loyalty of the delectable Phasus, capricious creature that he is, Set and company disappeared into the Forest.