"He will inevitably decide that it all fell apart because he had orchestrated it and he will carry the blame like a stone in his chest, too. He will add it to the pile and perhaps, someday when there are enough stones to weigh him down, he will walk into the sea and let them drown him" -- Kensley, written by Savage

Yidhra
Circle of the Depths

Age: Ageless | From the Beginning 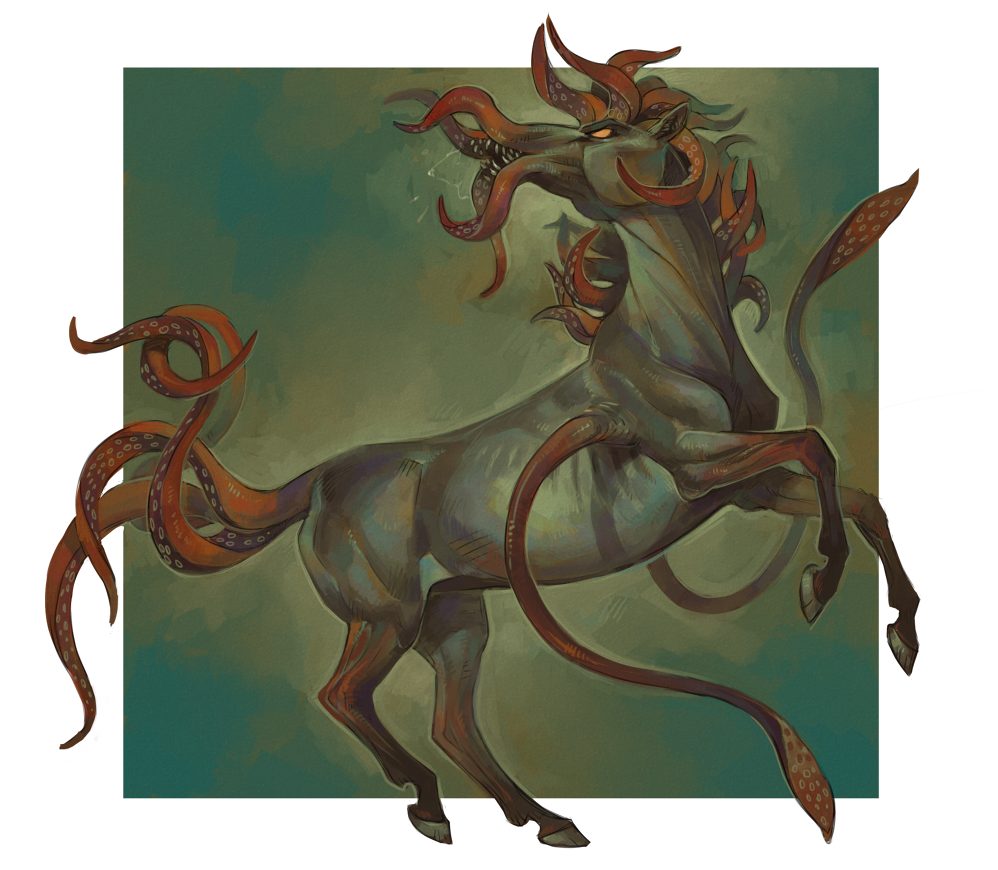 Imagine a lake surrounded by endless woods, dark and peaceful: tranquil. It reflects star and sun alike, periodically rippling from fish or wind; but usually silent and still. This peace is something beautiful, something miraculous; but that's when someone steps in and the lake becomes what it truly is: dangerous. Weeds beneath the surface tangle and grasp, holding down the visitor and trapping them beneath the surface... until air is lost and so are they.

This metaphor is her, a creature of patience and beauty, of tranquility. Alluring and wild, but dangerous and just waiting for someone to go beneath the surface.

Elemmírë was born outside of Beqanna in the land/territory of Ravenglade (the 13th Dimension), as the eldest child of Lyddia and Dracul. Due to her parents ancestry she possessed a large family, albeit a distant one, and could easily be connected to horses such as Aerofire, Bane, Siberia, Fane, Furia, Rapscallion, and others. Though she never settled into Ravenglade or even the are of the 13th Dimension fully, she did pass and eventually relocate herself into the 5th Element and specifically the Earth Kingdom. Never challenging for leadership she did, however, obtain status as a Silver for her prowess in combat. When the first cataclysm struck, she fled, and retreated like others to lands more vast and wide: Eclypse, Wings, Abaaya, and other far reaches of the world.

Titles and glories came and went but in time something changed. Elemmírë felt it, a call: an overwhelming urge and so she followed the navigational drive to the renewed lands of the 5th Element. Reawakened by ancient magics Elemmírë reinstated herself as a Silver through domination and even achieved greater as a Gold, but inevitably found her purpose as one of the few Oracles to exist. Given the title, the Primordium, she achieved masterful control over the element of Earth and soon found herself visited by a power that long slumbered within the element: the Stone. Shattered and unable to rebuild itself the Stone gifted Elemmírë with its earth-shard and thus enhanced her abilities as they were, making her a Goddess in the flesh. Lording over both creation and death Elemmírë grew haughty and arrogant, corrupted and seeking the rest of the shards as a means to gain power.

During and an incident involving the Shard, Elemmírë was struck down and killed but her body was taken into the ground and rotted immediately. After several days the soil split and a filly emerged, growing to full height and adult size after a two week span it was noted that she no longer demonstrated a genetic connection to her parents or to any horse: the Shard itself had forcibly remade her body from its own power and the earth around her. As such she dedicated herself to the purpose of serving to ancient power, and created a cultish following in the wake of her revival. The most prolific was Kalleis, a girl she adopted and molded into her own spy and servant.

Overtime she proved to many to be utterly driven to her cause and after the cataclysm of the desert, than the reef... Elemmírë succeeded where so many others had failed. In possession of the Stone, as a whole, she witnessed the final breaths of the Element's corpse before its lands succumbed to ruin and death. Spared for her service the Stone empowered her further and cursed her all the same... she drowned and died: reshaped and reborn again as she had been before in its own power and make. While she would never cease to exist, her immortality was at a cost: lives forgotten, names and faces, whole memories erased, and the only thing left to guide her was the whispers of a voice she could no longer remember.

For countless years she breathed and lived, survived in the ruins and chaos of the Element after its destruction; but the void began to take hold and the Stone decided it was time to cast out the servant. Expelled into the world she walked the oceans and seas until she arrived at Beqanna and it's vast reaches.

Renaming herself Yidhra, she possessed no memories of the lives before and only recalled darkness and voices: the pressure of the depths. During her first steps onto Beqanna she was introduced to Chemdog of Loess who provided interesting conversation but nothing more than that. She stayed for a time in his presence before venturing to the reaches of the Forest, River, and many others places (during these times she met Abysm and Rhonen, as well as Noah. Ivar provided some challenge and intrigue but the Kelpi's presence was only a memory when she turned to Pangea and heeded the call of Carnage.

Turning on Rhonen due to the God-Mage's word, she attacked him and sought to bring an end to his life. But in service of Carnage she soon found herself fleeing when the hiss of the Seal was broken at Rhonen's death. Due to the wild magic and spiraling conditions she fled deep into the waters and sought to free herself from death; but quickly found herself mutated in-form by the illness. Donning a new visage she rose from the sea with her Kraken-esque additions and claimed Pangea as her own: a place where she would rule.

Declarations of her claims were not absent responses and both Zain and Rajanish appeared to contest; but more shocking was the appearance of the ancient God... Carnage. Twisted through his magic and thrust into the heart of Pangea she was remade again, and rather than a creature of earth and magic- she became the blooded to the God and his land: to Pangea. With flesh and bone, and form renewed she continued to declare herself and sought out Kagerus and Solace whose kingdom of Hyaline had fled to the Silver Cove as a means to secure themselves from the plague. Though the start was rocky, Yidhra managed to create a truce of sorts between the regions.

As part of the Council leading the Sanctuary (the Eastern Regions), Yidhra stylized herself as Archon and devoted the whole of Pangea to the understanding of its magic, and the cure for the plague: not merely a treatment.