"She kills him because no matter how far she has come from the bitter, angry young girl she had been, she is still Starsin, and if he wants to make her world burn, she will be certain that he burns with it." --Starsin, written by Colby 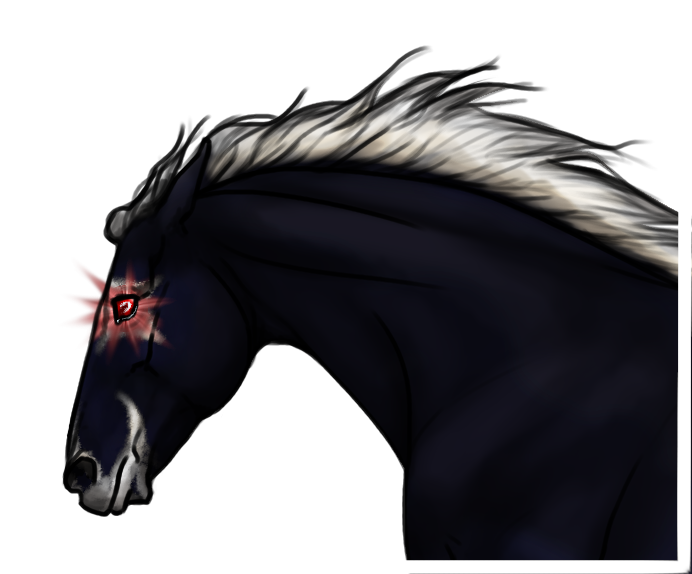 Two diamond-shaped patches, one for each eye, and a white marking that gives him a ‘smile’ over his mouth are the only markings Vadar displays.

Vadar was the self-conscious type before the Plague made everyone, including him, sick and terribly afflicted. Now he's more self-driven and prone to quick bursts of emotion. Enjoys studying his art of golem creation and those who also possess similar powers.

-Born 7/20/2018, to dam Wound in Sylva
*Masters Light Beam Emission
-Used cracked appearance trait for raffle, 9/23/18
-Meets Roseen & colt in the Meadow, the three separate when the Plague descends
-Casually interacts with mares Starsin, Peregrine Jude in the Meadow and River
-Gains glowing eyes, Golem Creation
-Infected by the plague, deteriorates in body and mind
-Wanders into Pangea
-Slightly healed by Eight
-Taken on one of the plague quests, knocked out 2nd round
-Returns to the mountain, suffering near death from plague fever
-Meets Anaxarete, passes out from sheer exhaustion/lack of health
-Awakens with the fever gone, but also short-term memory loss.
*Masters Golem Creation
-Makes his way from the Forest to Sylva, meeting Jude and then Starsin again
-End up in Pangea, after Litotes takes control
-Joins Pangea as initiate